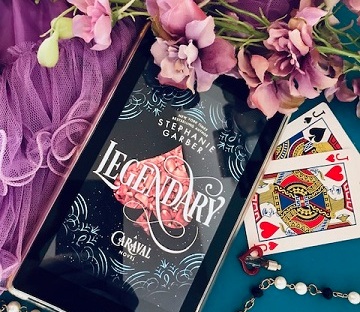 I have a confession to make…I just recently managed to finish reading Legendary, and in honor of Finale by Stephanie Garber releasing today I am posting my review. For reasons I will explain, I was dragging my feet through this book, and I kept giving up on it. Finally, once I changed my frame of mind I got through it, and I enjoyed it.

Let me explain. I liked the first Caraval book which was mostly narrated by Scarlett Dragna. It was a four star rating for me. Legendary was narrated by her sister Donatella, and I had a lot of trouble liking her, but once I got used to her snarky personality and the reasons behind it, the story got a bit better. Another thing I disliked was the way she kept changing her mind. One page she would decide on one course of action, and then the next page she would decide something else. This would go back and forth until finally a decision was basically made for her. It was really annoying.

When it came to the relationship between the sisters, they seemed pretty close in the first book, like a united front. But in this book they were keeping secrets from each other, and suspecting one another, it was very frustrating. I found myself screaming at them to collaborate, because they only have each other.

I did enjoy the male characters Dante and Jacks. I found their behaviors were more consistent than that of the female characters. Dante was dark, sexy, intriguing and he knew exactly what he wanted when it came to Tella. Jacks was a great villain, one I kind of started to like by the end. I didn’t see too much of Julian which made me a bit sad because I like him. Hopefully we get more of him in the next book.

This world is easy to get lost in, and once I stopped fighting it and just gave into it I was able to enjoy the story a lot more. Garber did a great job as always when it came to the world building. The gowns, the people, and the buildings were all described in great detail. The last 200 pages of the book were fun and entertaining, and it felt like I was playing along with Tella. Once I stopped taking the story so seriously and I let the spirit of Caraval sweep me away I was able to enjoy myself a lot more.

Any of you lucky people who got an ARC already read Finale? Will I like it?