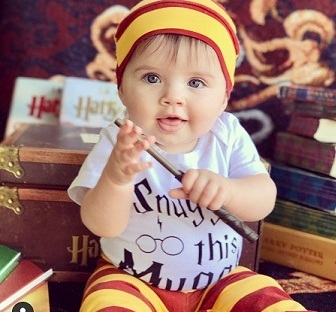 I came across this tag in a blog called Right Writing Words and it looked like a lot of fun, so I decided to give it a try. I personally love the Harry Potter series, they were the books which sparked my love for reading. I even wrote about them on this post.

What house are you in?

“Their daring, nerve and chivalry set Gryffindors apart.” I was surprised when I took the test on Pottermore and I got Gryffindor, I always thought I would be a Ravenclaw because I’m a big nerd. Gryffindor values courage and bravery, and our mascot is the lion.

What is your patronus?

So I really wish my patronus was a panther or a tiger, but it’s a stout *rolls eyes.* I actually had to google what a stout was, it turns out it’s a type of weasel/ferret. I had a ferret once, they’re really annoying.

What is your wand?

Fir wood with dragon core, 12 3/4″ and reasonably supple flexibility. Dragon core, now that sounds more like it. According to Ollivander, wands of fir wood come from the most resilient of trees, which produce wands that demand staying power and strength of purpose in their true owners, and that they are poor tools in the hands of the changeable and indecisive. Fir wands are particularly suited to Transfiguration, and favor owners of focused, strong minded and, occasionally, intimidating demeanor. (from Pottermore.com)

What would your bogart be?

Probably a swarm of very small insects, doesn’t matter what type, only thing that matters is that they might crawl all over me at once. I can take any insect if it’s alone, I cannot handle them in a group. *shudders*

What would your position in Quidditch be?

I’m not sporty at all, but I’m observant and patient which are good attributes for a seeker, so seeker it is.

Would you be pure blood, half-blood or muggle-born?

I spent my whole eleventh year of my life wishing I was muggle-born and my owl would arrive with my letter to take me to Hogwarts, but it never happened.

What job would you want after graduating Hogwarts?

I would love to write bizarre relevant stories for the Quibbler.

Which of the Deathly Hollows would you choose?

I know the good choice is the invisibility cloak, but could I break into a bank with it? Because I’m really broke right this minute. If not, then the elder wand just for a bit and then I swear I would destroy it.

Harry Potter and the Order of the Phoenix, because I feel it’s the book where Harry really grows and comes into his own, and it’s where things start to get darker. Also, Umbridge totally gets what she deserves.

Nope, I love all the books.

Harry Potter and the Goblet of Fire, because of the Yule Ball, the tournament, the other different schools, and a million other reasons that made this movie so action packed… also dragons.

Harry Potter and the Half-blood Prince, because they really messed up the ending. It’s one of the only films that was not very consistent with the book, they made up a few things and really changed others.

This is so hard, but I really loved Snape, both in the books and on the films. I loved his snarky comments and dark humor. Always.

Lavender Brown, to me she was super annoying both in the books and the films.

I’m split between Professor Lupin and Professor Slughorn. I thought both of them had really good hands on teaching methods, and interesting approaches to teaching.

Do you have any unpopular opinions about the series?

I get a little annoyed when people who have never read the books call themselves Harry Potter fans. Read the books people!